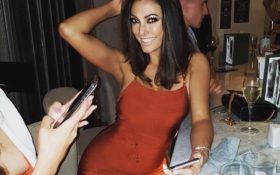 Sophie Gradon, a former pageant queen and reality TV star, was found dead in her parents’ home late Wednesday night. She was 32.

Grandon died of an apparent suicide, although the official cause of death has yet to be released.

The former Miss Great Britain rose to superstar level fame when she appeared on ITV’s reality series “Love Island” in 2016. The series included a tribute to Gradon in their most recent episode, as well as posting pictures of her on their Twitter account.

It has been reported that Gradon detailed her struggles with depression and anxiety on her social media accounts. One such post reads “Feel so guilty when my anxiety takes over, for not wanting to see or speak to anyone. Some days I get so overwhelmed I just want to nap!”

Gradon’s boyfriend, Aaron Armstrong, posted a heartfelt message on his Facebook account, expressing his love for her. He said he will “never forget that smile.” Just weeks ago Armstrong joked on Facebook that he and Gradon were already planning their wedding.

“At about 8:27 pm yesterday police attended a property in Medburn, Ponteland, where sadly a 32-year-old woman was found deceased,” a spokesperson for the Northumbria Police said in a statement on Thursday. “There are not believed to be any suspicious circumstances surrounding her death. A report will now be prepared for the coroner.”

Maybe the journey isn’t so much about becoming anything. Maybe it’s about un-becoming everything that isn’t really you, so you can be who you were meant to be in the first place. #editorial #topshop #lizrosephotography pic.twitter.com/lHad5BzE3n

Gradon has received an outpouring of grief from friends, co-stars, and fans on social media.