Bear tranquilized during visit to Catholic school - The Horn News 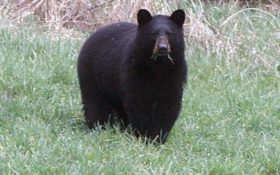 A small bear is back in the woods after a visit to a Catholic school in suburban St. Louis.

School is out for the summer at Most Sacred Heart Parish in Eureka, so the kids missed all of the excitement Tuesday when the bear arrived and got trapped inside.

The Rev. Joe Kempf told KTVI-TV that he had propped open a door during cleaning when the bear wandered inside.

The Missouri Department of Conservation says the bear was tranquilized and removed. The 90-pound bear, estimated to be about 18 months old, was taken to a wooded area, away from homes and businesses, and released.

Conservation department spokesman Dan Zarlenga says male bears that age are often pushed out of their den by parents to make room for young cubs.