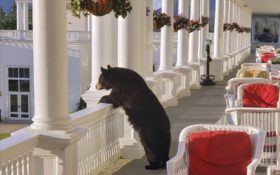 A bear has caused an uproar after running through the streets of Wilmington, Delaware.

The News Journal reports that police spent part of Thursday morning trying to catch the animal while bystanders rushed to get a look. Some residents were told to shelter in place.

But by 11:15 a.m., police in Delaware’s largest city said the bear left their jurisdiction. It’s unclear where the animal went.

The animal had caused widespread excitement in a city and a state that rarely sees bears.

During the morning, the bear was seen in a backyard and and in an alley. People later spotted it on railroad tracks behind a grocery store and then moving toward a park.

Wilmington police said they had planned to tranquilize the bear. But they also warned that they might have to shoot it if the animal came too close to people.