Bear on the run, escapes captivity for 3rd day! - The Horn News 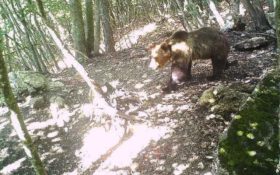 A brown bear in Italy has eluded capture for a third day, following its escape from an electrified enclosure in a forested Alpine region. Appeals mounted urging authorities not to shoot it.

It’s not clear how the bear got past an electrified fence, then scaled a nearly 4-meter (13-foot) high barrier. Days earlier, the bear had been captured by forest rangers after attacks on livestock.

Environment Minister Sergio Costa tweeted “Don’t shoot.” He wants to avoid a replay of the 2014 death of a bear caused by a tranquilizer dart after the animal had attacked a mushroom hunter in the same region.

Elsewhere on Twitter, some on Wednesday rooted for the bear.

The bear triggered sensor photos on Tuesday, showing it was not far from the Casteller di Trento Center where it had escaped.