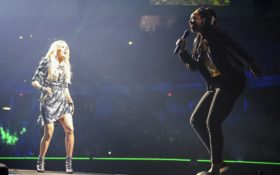 Erica McCall is still in a state of shock. She can’t believe that she got to perform on stage with Carrie Underwood at a concert.

The Indiana Fever center sang the guest verse of “The Champion” at the country music star’s show Sunday at Bankers Life Fieldhouse.

“It’s up there, definitely an experience I will never forget,” McCall said in a phone interview with The Associated Press on Tuesday. “It’s up there with going to the Final Four with (Stanford). I’m itching to get back on stage.”

McCall, who said she started rapping in high school and had the nickname Medium E, auditioned for the guest spot at the urgings of team vice president Tamika Catchings. She found out what song she’d potentially be singing a few weeks earlier and practiced in the shower, in front of teammates and facetiming with family members. She said she knew the words inside and out.

She had performed at rallies in high school and also at Stanford for a class project, but nothing like Sunday.

McCall found out two days before the concert and said she was calm until right before the performance, when she was underneath the stage ready to come up.

“There were definitely some nerves,” she said. “Once I started the rap it felt natural. It felt like I was in my natural element. I wanted to interact with the fans. They gave me a head piece in my ear so all I could hear was Carrie and her band.”

The performance went viral and McCall admitted she had to turn off notifications on her phone which has “blown up”.

“I’ve been interacting with Carrie’s fans. They say how much they enjoyed my performance. It’s still a whirlwind and been pretty surreal. A ball hit my head in practice the other day and that brought me back to reality.”

McCall said she wasn’t a huge fan of country music before the opportunity, but she knew Underwood’s song “Before He Cheats.” Now she’s a huge fan.

“She’s so sweet, incredible performer; just watching her,” McCall said. “She had a baby four months ago. Hearing that and seeing her live is a true testimony to how powerful women are.”

After the concert, Underwood took photos with the Fever.

“She’s very gracious with my team and said she’s a fan of us now,” McCall said.

The singer actually followed McCall on Instagram soon after the performance .

“I was screaming, my mom was still there, she went to the concert,” McCall said. “I was so excited.”