Basketball star dies after collapsing on the court - The Horn News 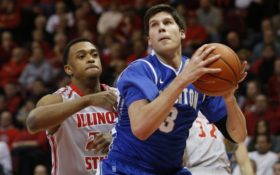 Zeke Upshaw, a swingman for the Detroit Pistons’ G League affiliate who collapsed on the court during a game over the weekend, died Monday.

Upshaw, 26, died at a hospital, the Grand Rapids Drive said. No cause was disclosed. He collapsed Saturday night near the end of a game against the Long Island Nets.

The Pistons held a moment of silence in Upshaw’s memory Monday night before their home game against the Los Angeles Lakers. The G League also pushed back the start of its playoffs, delaying not just the Drive’s upcoming game but the entire first round.

“Zeke was an outstanding young man whose powerful belief in himself and uncommon perseverance led to a successful professional basketball career,” G League president Malcolm Turner said in a news release. “A beloved member of the Grand Rapids Drive, Zeke’s continuous improvement and tireless work ethic were hallmarks of his career.”

Numerous NBA players posted messages of sorrow after Upshaw’s death was announced. Some members of the Pistons scrawled tributes on the sneakers they wore for their game Monday night, as did Ben Simmons of the Philadelphia 76ers.

“Lost a real one today,” Pistons star Andre Drummond wrote on Twitter. “Tragic loss of Zeke Upshaw, my thoughts and prayers are with all of Zeke’s family and friends during this difficult time. … Rest easy my guy.”

Upshaw scored 11 points in Saturday’s 101-99 win for Grand Rapids, which secured the Drive a spot in the G League playoffs. The Drive and Toronto affiliate Raptors 905 are scheduled to play in a single-elimination playoff game on Friday at Mississauga, Ontario. That game was originally slated to be played on Wednesday.

Upshaw was on defense Saturday night and coming out of a timeout with 49 seconds left when he appeared to stumble while chasing a Long Island player across the court. The video feed of the game showed Upshaw moments later motionless, lying face down. A referee stopped the game immediately, and Drive medical personnel were at Upshaw’s side within seconds.

He was carried away on a stretcher and taken to a nearby hospital. It’s not clear if he ever regained consciousness.

Upshaw started his college basketball career at Illinois State, averaging 1.6 points in 100 games with the Redbirds. He graduated with a degree in apparel, merchandising and design.

The Chicago native then transferred to Hofstra, where his numbers soared in the 2013-14 season. He started all 33 games in his one season with the Pride, averaging 19.8 points.

“Zeke was one of the kindest and hardest-working student-athletes I have had the privilege to coach,” Hofstra coach Joe Mihalich said. “Zeke laid the groundwork for the success we are having now and we will never forget the impact he had on Hofstra basketball. Our entire program is heartbroken that he is no longer with us but his influence will continue to be felt throughout the Pride family.”

Upshaw was undrafted and played internationally in Slovenia and Luxembourg. He spent most of the last two seasons with the Drive, appearing in 75 games primarily as a reserve and averaging 7.6 points.