This basketball player's message is going viral (Here's why...) - The Horn News 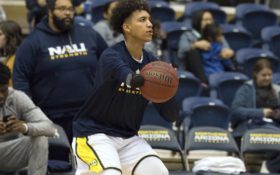 Omar Ndiaye strokes in long 3-pointers with a flick of his wrist alongside the rest of Northern Arizona’s players. Ndiaye has the same springy legs as his teammates, is just as quick off the dribble and has a wicked crossover.

Born without a right hand, the Northern Arizona junior guard overcame seemingly insurmountable odds, fusing talent and determination to achieve the dream of becoming a Division I basketball player.

“It is amazing what he can do with one hand, things we take for granted in life like tying his shoes or brushing his teeth,” Northern Arizona coach Jack Murphy said. “He’s one of the toughest kids I know. I can get on him and he won’t say a word. He just keeps working.”

Ndiaye started playing sports at an early age, trying everything from football, soccer, swimming and baseball. In baseball, he learned how to catch the ball with the glove on his left hand, take it off and throw it back, just as one-handed pitcher Jim Abbott did during 10 big-league seasons.

He took up basketball around 6, spending hours in the backyard experimenting with how to dribble, catch the ball, hold it right so he could shoot it.

“It was a lot of reps, just trying to figure stuff out,” he said. “I didn’t completely think too much, I just did it. A lot of going into my backyard and figuring it out, shooting, how to hold the ball. I felt like it came naturally to me.”

The extra work paid off.

Ndiaye developed that wicked crossover by using his right arm to dribble the ball back to the left, using it during three varsity three years at Monte Del Sol Charter School in Santa Fe, New Mexico.

He played sparingly as a sophomore, but averaged 16.2 points per game as a junior. Ndiaye was one of the city’s best players as a senior, putting up 21 points, eight assists, five rebounds and two steals per game.

The most amazing part: Ndiaye did it all as a one-handed point guard.

During his high school and AAU days, Ndiaye worked out with A.J. Bramlett, a center on Arizona’s 1997 national championship team. Murphy was in his first year under Lute Olson at Arizona in 1997 and kept in touch with Bramlett through the years.

Bramlett alerted Murphy to Ndiaye, giving him updates on his progress through the years. Murphy offered Ndiaye a chance to join the Lumberjacks as a walk-on after he graduated high school, fulfilling what had once seemed like an impossible dream.

“I always had the thought about it, but I didn’t know it could come true, so it’s a surreal feeling,” he said. “I’ve dreamed about it my whole life. It’s also very tough, especially being a walk-on because a lot isn’t guaranteed as a walk-on, but you have to come in with the same mentality, just trying to work hard and make your team better.”

Ndiaye’s primary role with the Lumberjacks is to provide energy, effort, work on the scout team, offer encouragement and a big dose of inspiration.

He’s also in the history books as a Division I player.

Ndiaye has appeared in five career games over three seasons in Flagstaff, logging seven minutes. He has taken five career shots and made two — 3-pointers in each of his first two seasons.

“When I show the team I can do things with one hand, it gets them going and know they can work harder, too,” he said.

Ndiaye also spreads inspiration beyond his teammates. Since he was a kid, he has been asked about his arm. When Northern Arizona’s players participate in basketball camps, the questions come flying from the kids.

Ndiaye likes to have fun with his missing hand and the kids, making up stories about what happened to it. One time, he told the kids his arm was bitten off by a shark and Murphy fielded calls from parents who said their kids were now afraid to go in the water.

“I feel like that’s one of the cool things about being the way I am, when I meet new people I can just make up a story, say something crazy happened,” Ndiaye said. “People definitely ask, especially when we have camps, the kids always ask me how I do it. I always let them know if they have confidence in themselves they can do anything. They see me doing it with one hand, the sky’s the limit for them.”

Ndiaye’s impact on people won’t end when he graduates college with a finance degree next year. He plans on doing inspirational speaking and has a great story to tell.