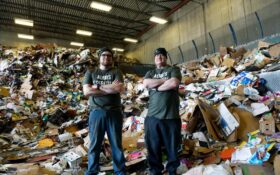 A college baseball player from South Dakota whose prosthetic arm was stolen from his vehicle got it back Tuesday after it was found at a recycling plant.

Augustana’s Parker Hanson, a right-handed pitcher, was born without a left hand, but found a way to adapt at a young age so he could play his favorite game all the way up through the college level. His prosthetic arm and its attachments were in a backpack that was stolen from his unlocked pickup truck outside his home.

Hanson got a text Tuesday saying that his prosthetic had been recovered at Millennium Recycling Inc. in Sioux Falls, the Sioux Falls Argus Leader reported. A worker at the plant found it among other items in the recycling facility and picked it out.

“The manager walked in and it was sitting on her desk,” Hanson said.

The prosthetic was “pretty banged up” and Hanson said it was no longer usable. He was fundraising both for a new prosthetic and to raise money for charity when he got another piece of good news Tuesday: A Minneapolis-area hospital specializing in pediatric orthopedics was giving him a free replacement.

Hanson discovered his backpack missing on May 3 and took to social media to vent his frustrations. The next day, the Sioux Falls Police Department recovered a backpack with some of the prosthetic’s attachments near Hanson’s house. At the same time, Hanson’s story became widely shared and people started fundraising for a replacement limb.

Nate Riddle and Tim Kachel were the workers who found Hanson’s prosthetic Monday night while working a shift picking out nonrecyclable items from the line.

They said they’ve seen just about everything mixed in with recyclables, but when Riddle picked out the prosthetic arm, he almost threw it away. Before he got the chance, Kachel stopped him.

“I recognized it instantly,” Kachel said, “I was jumping up and down screaming ‘Stop!’”

Kachel keeps up with news and remembered hearing Hanson’s story. He said he knew what the arm was as soon as he spotted it.

“I had no idea what was going on since he (Kachel) was freaking out, so I throw it over and he gives me the background,” Riddle said.

Riddle was skeptical about Kachel’s claims but let him turn the arm in to the front office. Then, on Tuesday morning, the pair’s line was paused and everybody was asked to go to the office. There they met Hanson for the first time.

“You never know what you’re going to see coming through this line,” Kachel said. “He (Hanson) was so relieved and excited, he was shaking.”

Hanson learned later Tuesday that he will receive a new prosthetic for free.

Lauren Elm, marketing manager for Shriner’s Children’s Twin Cities, told the Argus Leader that Hanson was approved to receive a new prosthetic at no cost to him. His fundraiser will continue and the money will go to charity, Elm said.