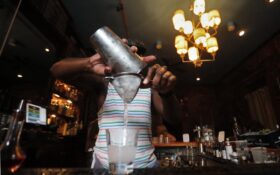 Authorities are investigating a Long Island bar that posted on Instagram that it was taking bets on whether Chicago or New York City would see more shootings over Labor Day weekend.

The Cliffton, a bar in Patchogue, New York, shared photos of a paper grid hung in the bar with patrons placing bets on the number of shootings in the two cities, Newsday reported Tuesday. The winner would take home an unspecified cash prize.

The betting is “not only sickening, but also appears illegal under the Alcoholic Beverage Control law,” the State Liquor Authority said in a statement to the newspaper.

The state’s alcohol and beverage law prohibits gambling at establishments with a liquor license, with few exceptions.

The caption of the post read, “Let the shooting sprees begin!” the newspaper reported. The Cliffton’s Instagram page is private.

“These reports are repugnant and those responsible for this gambling pool should be ashamed,” Rich Azzopardi, a Cuomo spokesman, said to the newspaper.

The Long Island bar also refused to let representatives of the State Liquor Authority conduct an inspection this week, which the agency says is itself grounds to revoke the bar’s liquor license.

Brian Neal, owner of The Cliffton, did not return a request for comment from the newspaper.

“All it does is raise the angst and anger of others,” Patchogue Mayor Paul Pontieri said. “To be buying a box to see how many people die is something I cannot fathom. It’s not who we are as a community.”

Cities across the country have seen a surge in shootings over the summer, but the spike defies easy explanation. The increase in violence likely represents a mix of factors, including record unemployment levels, the death toll from the coronavirus pandemic, stay-at-home orders, intense stress and the weather.