Bannon strikes a deal with Mueller? - The Horn News 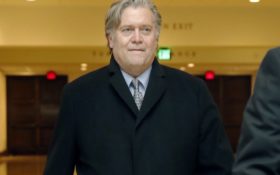 Bannon is expected to be interviewed by prosecutors instead of testifying before a grand jury. He is expected to cooperate with the special counsel, the person said. It’s unclear when the interview will occur.

Bannon, the former head of Breitbart News, appeared before the House Intelligence Committee on Tuesday but refused to answer questions about his time on the Trump presidential transition team and in the White House.

Bannon left the White House in August and has had a messy falling out with President Donald Trump.

The panel has the power to compel him to return for additional questioning under the subpoena issued Tuesday, sources said. They spoke on condition of anonymity to discuss private committee deliberations.

Bannon and the White House spurred a rare bout of bipartisan anger Tuesday when he refused to answer questions during his marathon interview by the House Intelligence Committee.

The committee sources said that they want more information from him — including documents — but would not specify what has been requested or what they want to know more about.