Baker under fire for pro-Trump cookie - The Horn News 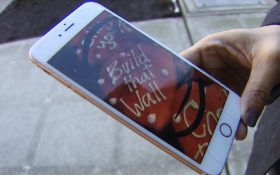 A Washington state baker is apologizing for a politically charged Valentine’s Day cookie that generated an uproar on social media.

KING-TV reports that Ken Bellingham, who owns Edmonds Bakery, has gotten phone calls from frustrated customers about the heart-shaped cookie with “Build that Wall” in frosting letters.

The cookie was one of several decorated with messages such as “Addicted to Love” and “Cool Beans.” Bellingham says the cookie was a joke and not meant as a political statement.

A woman, Ana Carrera, posted a photo of the cookie on Facebook, saying that as a person with Mexican heritage it felt personal.

Bellingham says someone taped a sign to the shop calling for a boycott.