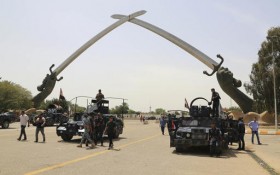 An explosives-laden car detonated on Monday in the Iraqi capital, killing at least 18 Shiite pilgrims who were commemorating the anniversary of the death of a revered imam, officials said.

Shortly after the explosion, the Sunni extremist Islamic State group, which sees Shiite Muslims as apostates, claimed responsibility for the attack in an online statement. It said the assault was carried out by a suicide bomber, but Iraqi officials denied that.

According to an Iraqi police officer, the car was parked in Baghdad’s southwestern Saydiyah neighborhood and blew up shortly after midday. The explosion killed at least 18 and wounded 45 people, the officer said.

A medical official confirmed the causality figures. Both officials spoke on condition of anonymity as they were not authorized to talk to the media.

Tens of thousands of Shiite faithful have been making their way this week to the northern Baghdad neighborhood of Kadhimiyah, where the 8th century Imam Moussa al-Kadhim is buried. Security forces have blocked major roads in Baghdad in anticipation of attacks against pilgrims who traditionally travel on foot from different parts of Iraq.

Monday’s attack came a day after two car bombs in the southern Iraqi city of Samawah killed at least 31 people and wounded 52, an attack that was also claimed by the Islamic State.

The annual Shiite pilgrimage prompted anti-government protesters on Sunday to disband their demonstration — at least temporarily — in Baghdad’s heavily fortified Green Zone that they had stormed a day earlier.

While IS has suffered a number of territorial defeats in the past year, the group still controls significant stretches of territory in Iraq’s north and west, including the country’s second largest city of Mosul, estimated to still be home to more than 1 million civilians. Militants have recently increased attacks inside Baghdad in what officials say is an attempt to distract from their recent battlefield defeats.

According to the United Nations, at least 741 Iraqis were killed in April due to ongoing violence, a sharp decline from the previous month. In its monthly report issued on Sunday, the U.N. mission to Iraq put the number of civilians killed at 410, while the rest were members of the security forces. A total of 1,374 Iraqis were wounded that month, it added.

The capital, Baghdad, remains the worst-hit area, with 232 civilians killed and 642 wounded in April, followed by the northern province of Ninevah, which is almost entirely controlled by the Islamic State group, with 72 killed and 30 wounded.