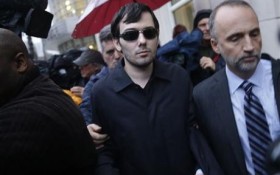 He’s the enfant terrible of pharmaceuticals, a 32-year-old CEO who unapologetically raised the price of the only approved drug for a rare disease from $13.50 to $750 per pill.

He’s a millionaire music aficionado who riled rap fans by buying the only known copy of an album by the Wu-Tang Clan. He’s an unabashed self-promoter who livestreams his daily life and boasts he’s “the world’s most eligible bachelor” and “the most successful Albanian to ever walk the face of this Earth.” And he’s an equally unabashed provocateur who jousts online with his critics.

Now, prosecutors say Martin Shkreli is a fraudster. He pleaded not guilty Thursday to charges that he looted Retrophin, a pharmaceutical company he founded, of $11 million to pay back disgruntled hedge fund clients.

It was a case he seemed almost to dare the government to bring.

“Politicians love to beat up on guys that are seen to be public enemies, if you will,” he said at a Forbes health care conference Dec. 3.

Combative, often crass and willfully sophomoric, Shkreli has — so far — reveled in being described as a “pharma bro,” the “drug industry’s villain” and far more unprintable terms since his Turing Pharmaceuticals jacked up the price of Daraprim. It treats a rare parasitic disease that strikes pregnant women, cancer patients and AIDS patients. (The criminal case doesn’t involve Turing or Daraprim.)

He defends the decision as capitalism at work and says insurance and other programs ensure that people who need Daraprim will ultimately get it.

But it sparked outrage that resounded from medical centers to the presidential campaign: Hillary Clinton termed it price-gouging, while Donald Trump called Shkreli “a spoiled brat.”

Shkreli grew up in Brooklyn, the son of immigrant parents who worked at janitorial jobs. He attended New York’s Hunter College High School, a selective, rigorous public school. He has said he stopped going to class and didn’t graduate, though he evidently bears no ill will: His foundation recently gave the school $1 million. He’s said he later earned a finance degree from the city’s Baruch College.

“I always wanted to start a public company and make a lot of money,” Shkreli told Bloomberg Businessweek in 2014.

A teenage internship at a hedge fund got his foot in Wall Street’s door. By his early 20s, Shkreli had his own hedge fund — and had a reputation as an outspoken short seller, or investor who bets a stock’s price will decline.

His approach earned the enmity of companies whose prospects he had publicly impugned and doomed his first hedge fund when one bet proved wrong.

Undeterred, Shkreli launched a new fund — it also collapsed, prosecutors say — and launched himself in 2011 into the pharmaceuticals business as CEO of Retrophin, which also has drawn scrutiny over sharp drug price hikes. The publicly traded company ousted him last year.

Some complaints about his management were oddly personal: An ex-employee at one of his hedge funds has said in civil court papers that Shkreli sent his wife and sons such messages as: “I hope to see you and your four children homeless and will do whatever I can to assure this.” The disclosure came in a suit — against the ex-employee, whom Shkreli had accused of theft. It was eventually settled.

“I had two guys parked outside of his house for six months” watching him, Shkreli told the rap news site HipHopDX in a tough-talking, expletive-filled interview published Wednesday, the day before his arrest.

A music fan since his days in a high school rock band, Shkreli recently emerged as the $2 million buyer of the sole copy of what’s been called the world’s rarest album: the Wu-Tang Clan’s “Once Upon a Time in Shaolin,” which the group auctioned to only one person on the condition that it not be put to commercial use.

“I’m staring at a Picasso in my living room right now that’s no different from the Wu-Tang box, except it’s about 20 times more expensive,” he told HipHopDX.

Some rap aficionados lamented that the album was in his hands, and the group noted the sale agreement was made before the furor over Daraprim this fall. An indie punk label Shkreli had backed, Collect Records, cut ties with him this fall.

Still, Shkreli mused to HipHopDX about delving further into the rap world: bailing out up-and-coming artist Bobby Shmurda, who is jailed in a drug-gang case, and even writing raps of his own.

“It fits me perfectly,” he said. “It’s this mix of bravado, money, music, attitude.”