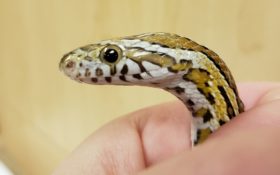 A German man’s bachelor party in the Austrian Alps ended with a snake bite on the tongue and a trip to a hospital.

The Austria Press Agency reported Monday that the local Red Cross said the 38-year-old was dared to touch with his tongue a baby viper on the floor of an Alpine hut at Neuberg im Muerztal in southeastern Austria.

The snake bit him and his tongue swelled up. Mountain rescuers and a doctor were called to the scene on Saturday evening, and he was taken to a hospital.

The Red Cross said the partygoers may have confused the young snake with a worm.