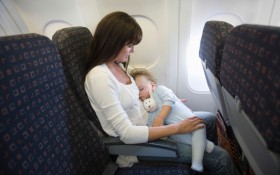 Whoa, baby! A Los Angeles doctor returning from her honeymoon ended up delivering a baby on an overseas flight when a fellow passenger went into early labor.

Dr. Angelica Zen, a resident physician at UCLA, says she didn’t have much obstetrics training but didn’t hesitate to help during the Air China flight from Taiwan to Los Angeles.

Zen tells Los Angeles news station KABC-TV that flight attendants acted as stand-in nurses, and most passengers were asleep until the cabin lights came on for the delivery.

The captain headed to the nearest airport, in Anchorage, Alaska. It’s unclear if the birth occurred within a 12-mile radius of Alaska, which would make the baby a U.S. citizen by law.

Zen says the baby looked healthy and the mother was happy.