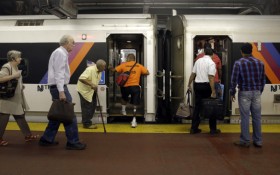 The Paris public transport company RATP says a baby boy born in a suburban train will get free rides in the French capital until he is 25.

Live-tweeting the event Monday, the RATP said the baby was born in a train in the center of Paris, disrupting traffic on the RER A line. Rescue workers took care of the mother and child and brought them to the nearest hospital. News of the “unannounced birth” was displayed on Paris train traffic screens.

The RER A line issued its “sincere congratulations” to the baby’s mother — and tweeted that traffic was back to normal.

Lots of Parisians happily welcomed the birth on social media. Others, however, noted the RATP’s gift wasn’t all good news, saying that Paris train traffic is frequently disrupted by strikes and other incidents.