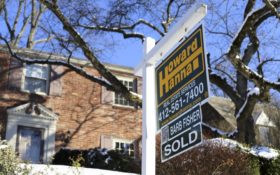 The average long-term U.S. mortgage rate fell this week to its lowest level since September, a potential boost to the housing market which has been in decline for nearly a year.

Mortgage buyer Freddie Mac reported Thursday that the average on the benchmark 30-year rate fell to 6.15% from 6.33% last week. A year ago the average rate was 3.56%.

The average long-term rate reached a two-decade high of 7.08% in the fall as the Federal Reserve continued to boost its key lending rate in its quest to cool the economy and tame inflation.

The big rise in mortgage rates during the past year has throttled the housing market, with sales of existing homes falling for 10 straight months to the lowest level in more than a decade.

Though home prices have retreated as demand has declined, they are still nearly 11% higher than a year ago. Higher prices and a doubling of mortgage rates have made homebuying much less affordable for many people, but recent rate declines could give some homebuyers new hope.

“Rates are at their lowest level since September of last year, boosting both homebuyer demand and homebuilder sentiment,” said Sam Khater, Freddie Mac’s chief economist. “Declining rates are providing a much-needed boost to the housing market, but the supply of homes remains a persistent concern.”

At its final meeting of 2022, the Federal Reserve raised its rate 0.50 percentage points, its seventh increase last year. That pushed the central bank’s key rate to a range of 4.25% to 4.5%, its highest level in 15 years.

Though inflation at the consumer level has declined for six straight months, Fed officials have signaled that they may raise the central bank’s main borrowing rate another three-quarters of a point in 2023, which would be in a range of 5% to 5.25%.

Rates for 30-year mortgages usually track the moves in the 10-year Treasury yield, which lenders use as a guide to pricing loans. Investors’ expectations for future inflation, global demand for U.S. Treasurys and what the Federal Reserve does with interest rates can also influence the cost of borrowing for a home.