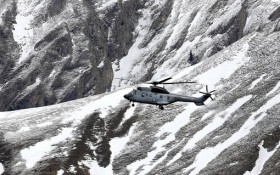 An avalanche in the French Alps struck a high school ski group Wednesday afternoon, killing at least three people, according to French officials.

French authorities in the Alps region confirmed that two high school students and a Ukrainian skier died in the accident, which took place on a ski trail that had been closed amid avalanche warnings.

Officials say the avalanche hit 10 students and a teacher from the Saint Exupery school in Lyon. A telephone hotline has been opened in Lyon for relatives of those affected by the tragedy.

Local officials did not give any information on the number of missing but said 60 workers had been mobilized in the search-and-rescue operation.

Commander Bertrand Host said there had been warnings of a high risk of avalanches ahead of the slide. He spoke to BFM television from the avalanche site.

The regional Dauphine Libere newspaper reported that four of the students were found in cardiac arrest but their teacher was conscious.