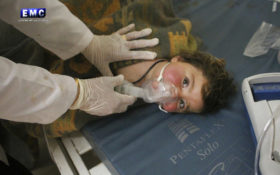 Turkey’s health minister said Tuesday that test results confirm sarin gas was used in an attack on a northern Syrian town earlier this month and the Russian military said the Syrian government is willing to let international experts examine its military base for signs of chemical weapons.

Col. Gen. Sergei Rudskoy of the Russian General Staff said in televised remarks that Russia will provide security for international inspectors seeking to examine Syrian bases, and that Damascus has agreed to allow the inspections. His comments came shortly after Russian President Vladimir Putin said Moscow will appeal to the United Nations to investigate the attack on Khan Sheikhoun.

The April 4 chemical weapons attack on the rebel-held town in Idlib province left nearly 90 people dead. The United States blamed President Bashar Assad’s government and launched nearly 60 cruise missiles on Friday at the Shayrat air base in the central province of Homs, where it claims the attack originated.

Moscow, which is a strong backer of the Syrian government, has dismissed suggestions that the Damascus could be behind the attack. The Syrian government also denied the allegation, saying its air force bombed a rebel arsenal that had chemical weapons stored inside.

Putin told reporters on Tuesday that Russia would appeal to a U.N. agency in the Hague, urging it to launch an official probe. The Russian president also said Moscow has received intelligence about planned “provocations” using chemical weapons that would be used to pin the blame on the Syrian government.

The Russian statements came as U.S. Secretary of State Rex Tillerson arrived in Moscow where he will meet Russian Foreign Minister Sergey Lavrov on Wednesday.

In Turkey, a main backer of the Syrian opposition, Health Minister Recep Akdag said test results conducted on victims of the Khan Sheikhoun attack confirm that sarin gas was used. Akdag said that blood and urine samples taken from the victims confirmed that they were subjected to the nerve agent. His comments were reported by the state-run Anadolu news agency.

Turkey last week conducted autopsies on three victims of the gas attack who were brought from Syria. Officials from the World Health Organization and the Organization for the Prohibition of Chemical Weapons participated in the autopsies.

In Damascus, a Syrian official said Foreign Minister Walid al-Moallem will visit Russia on Thursday where he will meet officials in Moscow.

The official, who spoke on condition of anonymity in line with regulations, said Tuesday that there might be a three-way meeting later this week in Moscow between officials from Russia, Syria and Iran.

Syrian government forces battling insurgents in Daraa have dropped several barrel bombs on the southern city, opposition activists said Tuesday, a day after the White House suggested that the use of the crude explosive devices could bring a U.S. response.

Russia’s Defense Ministry meanwhile said two of its army officers were killed and a third seriously wounded in a mortar attack in Syria, without specifying when or where it took place. Russia has been waging an air campaign in support of Syrian forces since 2015.

The Britain-based Syrian Observatory for Human Rights said the fighting in Daraa erupted Monday when rebels attacked a government-held area in the city center. It said 16 pro-government fighters, including an army colonel, have been killed.

Both the Observatory and Daraa-based activist Ahmad al-Masalmeh said warplanes carried out raids on Daraa while helicopter gunships dropped at least 14 barrels loaded with explosives.

White House spokesman Sean Spicer said Monday that the use of barrel bombs, which government forces have repeatedly employed throughout the six-year-old conflict, might prompt a U.S. retaliation.

Hakim Baghdadi said authorities have prepared 100 buses to move 5,000 people out of the Shiite villages of Foua and Kfarya. Baghdadi, a member of the relief committee for the two villages, said they will be bused first to the nearby city of Aleppo, then on to other destinations.

The predominantly Shiite villages have remained loyal to the Syrian government while the rest of the surrounding Idlib Province has fallen under the rule of hard-line Sunni rebels.

The rebel commander in charge of two opposition-held towns in western Syria says evacuations will also begin from his districts tomorrow. The commander, who goes by the name Abu Adnan al-Zabadani, said residents and fighters electing to leave will be bused out of Madaya and Zabadani on Wednesday, before the towns are returned to government control.

An arrangement between the government and rebels has linked the fate of the four besieged towns since 2015. The U.N. has decried the arrangement, saying it has served to obstruct the provision of badly needed assistance.