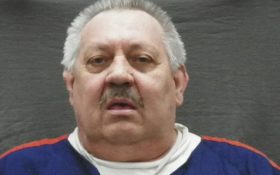 A Michigan man serving life in prison for killing a 13-year-old girl is a suspected serial killer, police said Wednesday as they dug up part of a forest in a search for as many as seven other girls who have been missing for decades.

Using earth-moving equipment, as well as shovels and rakes, authorities have spent two days excavating a wooded site about 30 miles (50 kilometers) northeast of Detroit in the belief that Arthur Ream buried all of his victims in the same general area.

The police commissioner in nearby Warren appealed to the inmate to help investigators find the remains.

“You want to be a man about it?” Bill Dwyer said. “Let’s help the families out. Give them some closure. That’s what it’s all about.”

Ream is no stranger to the area. Following his 2008 conviction for killing Cindy Zarzycki, he led investigators to her remains, which had been buried there for more than 20 years.

The current search area spans about 24 acres. Searchers are trying to narrow that down to a more manageable size, police said.

Police interviewed Ream a few months ago after fellow prisoners said he boasted about killing four to six other people. He later failed a lie-detector test, Dwyer said.

Police say a suspect in the decades-old slaying of a 12-year-old Michigan girl boasted to fellow prisoners that he killed several other girls. (May 9)

Ream, who turned 69 on Wednesday, was sentenced in 1998 to 15 years in prison for criminal sexual conduct and taking indecent liberties with a child less than two years earlier.

Attorney R. Timothy Kohler, who was appointed by a judge to represent him in his 2008 murder trial, said his former client is “not a likable guy” and not healthy.

“He smoked excessively and was overweight. I didn’t want to particularly hear his story, other than my sense that he was denying any allegation of intentionally murdering” Cindy.

“He claimed his innocence. He never told me that he did anything. Frankly, I don’t think I was interested in knowing that,” Kohler said.

Cindy was last seen on April 20, 1986, after going to a Dairy Queen in Eastpointe, a mostly blue-collar suburb north of Detroit.

Other possible victims include 12-year-old Kimberly King, who disappeared in 1979 while visiting her grandmother in Warren; Kim Larrow, who was 15 when she was last seen in 1981 in Canton Township, west of Detroit; and Kellie Brownlee, who was 17 when she vanished in 1982 from suburban Novi.

Authorities are also searching for additional victims who have not been publicly identified.

During Ream’s murder trial, prosecutors said he told Cindy that he was taking her to a surprise birthday party for his son, who was her boyfriend at the time. Scott Ream’s birthday actually was months earlier.

Even after leading police to her remains, Ream denied killing her. He told a police detective in 2008 that Cindy was with his son the day she died and claimed she fell from an open elevator at his carpet warehouse in Warren.

Her father hopes Ream tells police where other bodies might be found.

“I pray for him every day that his heart softens,” Edward Zarzycki said Wednesday at the excavation site.

“Please just tell us where she is so we can move on,” Beyma told reporters. “That’s all. Let us take her and bury her next to my grandmother.”