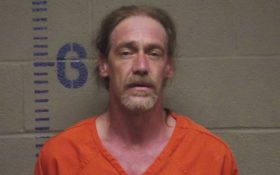 Police in Oklahoma say they found a rattlesnake, a canister of radioactive powdered uranium and an open bottle of Kentucky Deluxe whiskey during a traffic stop of a vehicle that had been reported stolen.

The traffic stop happened June 26 in Guthrie, about 30 miles (45 kilometers) north of Oklahoma City. Guthrie police Sgt. Anthony Gibbs told Oklahoma City TV station KFOR that police don’t know why the uranium was in the vehicle or how it was obtained, though uranium ore can be bought on Amazon.

Gibbs says police also found a gun in the console and a terrarium in the backseat containing a pet Timber rattlesnake.

Gibbs says the driver, Stephen Jennings, was charged with possession of a stolen vehicle, transporting an open container of liquor and driving with a suspended license.