Authorities have identified the California shooter - The Horn News 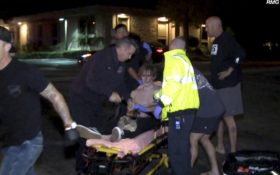 Using a smoke bomb and a handgun, a hooded former Marine combat veteran dressed all in black opened fire during college night at a country music bar in Southern California, killing 12 people and sending hundreds fleeing in panic before apparently taking his own life, authorities said Thursday.

Authorities said the motive for the attack Wednesday night was under investigation, but there was “no indication” that he was targeting the employees of the restaurant.

The killer was identified as 28-year-old Ian David Long, a former machine gunner and decorated veteran of the war in Afghanistan who was interviewed by police at his home last spring after an episode of agitated behavior that they were told might be post-traumatic stress disorder.

Screaming in fear, patrons rushed for the exits, ducked under tables and hurled barstools to smash second-floor windows and jump to safety as gunfire erupted at the Borderline Bar & Grill, a hangout popular with students from nearby California Lutheran University.

“I dropped to the floor,” Sarah Rose DeSon told ABC’s “Good Morning America.” ″A friend yelled, ‘Everybody down!’ We were hiding behind tables trying to keep ourselves covered.”

The dead included 11 people inside the bar and a veteran sheriff’s sergeant who was the first officer inside the door, Ventura County Sheriff Geoff Dean said.

“It’s a horrific scene in there,” Dean said in the parking lot. “There’s blood everywhere.”

The bloodshed was the latest in what seems to be a never-ending string of mass shootings that are happening with terrifying frequency across the United States.

It was the nation’s deadliest such attack since 17 students and teachers were killed at a Parkland, Florida, high school nine months ago. It also came less than two weeks after a gunman massacred 11 people at a synagogue in Pittsburgh.

President Donald Trump praised police for their “great bravery” in the California attack and said, “God bless all of the victims and families of the victims.” He ordered flags flown at half-staff in honor of the victims.

Long was armed with a Glock 21, a .45-caliber designed to hold 10 rounds plus one in the chamber, according to the sheriff. But it had an extended magazine — one capable of holding more ammunition — that is illegal in California, Dean said.

The killer also deployed a smoke device, a law enforcement official told The Associated Press. The official was not authorized to discuss the investigation publicly and spoke on condition of anonymity.

Authorities undertook a search of Long’s home in Newbury Park, about 5 miles from the Borderline bar, for clues to what set him off.

“There’s no indication that he targeted the employees. We haven’t found any correlation,” the sheriff said. “Maybe there was a motive for this particular night, but we have no information leading to that at all.”

The Marine Corps said Long served from 2008 to 2013, rose to the rank of corporal and was sent to Afghanistan in 2010-11, receiving several medals and commendations.

Authorities said he had no criminal record, but Dean said officers were called to his home in April, when deputies found him angry and acting irrationally. The sheriff said officers were told he might have PTSD because of his military service. A mental health specialist met with him and didn’t feel he needed to be hospitalized.

Tom Hanson, 70, who lives next door to Long and his mother, said Wednesday that he called the police about six months ago when he heard “heavy-duty banging” and shouting coming from the Longs’ home.

“I was concerned because I knew he had been in the military,” he said.

Hanson said the sheriff’s deputy who arrived took his information, but he never learned more about what happened and hadn’t spoken to Long since then. He said he was “dumbfounded” by the bloodshed.

The gunman was tall and wearing all black with a hood and his face partly covered, witnesses told TV stations. He first shot a security guard standing outside, then went in and opened fire on staff members and patrons, the sheriff said.

Sheriff’s Sgt. Ron Helus and a passing highway patrolman arrived at the Borderline around 11:20 p.m. in response to several 911 calls, heard gunfire and went inside, the sheriff said.

Helus was immediately hit with multiple gunshots, Dean said. The highway patrolman pulled Helus out, then waited as a SWAT team and scores more officers arrived. Helus died early Thursday at a hospital.

By the time officers entered the bar again, the gunfire had stopped, according to the sheriff. They found 12 people dead inside, including the gunman, who was discovered in office and had apparently shot himself, the sheriff said.

“There’s no doubt that they saved lives by going in there and engaging with the suspect,” said Dean, who was set to retire on Friday. He praised the slain officer — a close friend — as a hero: “He went in there to save people and paid the ultimate price.”

In addition to the dead, one other person was wounded by gunfire, and as many as 15 others suffered minor injuries from jumping out windows or diving under tables, authorities said.

People at the bar fled from all exits, broke through windows and hid in the attic and bathrooms, the sheriff said.

“Unfortunately our young people, people at nightclubs, have learned that this may happen, and they think about that. Fortunately it helped save a lot of lives that they fled the scene so rapidly,” he said.

Shootings of any kind are extremely rare in Thousand Oaks, a city of about 130,000 people about 40 miles (64 kilometers) from Los Angeles, just across the county line.

The Borderline, which includes a large dance hall along with several smaller areas for eating and drinking, was holding its regular “College Country Nights” when the attack took place.

Nick Steinwender, Cal Lutheran student body president, told KTLA-TV he immediately started receiving messages about the shooting, and he and his roommate went to the scene to offer rides back to campus or moral support.

“It’s going to be a very somber day,” Steinwender said. “I know we don’t have all the details in yet, but you know, it just feels like it’s an attack on our community. You know, I think it’s going to be something that we’re going to have to come together and move past.”

The bar is also close to several other universities, including California State University Channel Islands in Camarillo, Pepperdine University in Malibu and Moorpark College in Moorpark.

Cole Knapp, a freshman at Moorpark, said he was inside the bar when the shooting began, but he thought at first that it was “just someone with an M-80, just kind of playing a prank.” Then he said he saw the gunman, wearing a small black head covering and black hoodie and holding a handgun.

“I tried to get as many people to cover as I could,” Knapp said. “There was an exit right next to me, so I went through that. That exit leads to a patio where people smoke. People out there didn’t really know what was going on. There’s a fence right there so I said, ‘Everyone get over the fence as quickly as you can,’ and I followed them over.”

He said a highway patrol officer who happened to be pulling someone over was nearby.

“I screamed to him, ‘There’s a shooter in there!’ He was kind of in disbelief, then saw that I was serious,” Knapp said. He said he had friends who hadn’t been accounted for.

Tayler Whitler, 19, said she was on the dance floor with her friends nearby when she saw the gunman shooting and heard screams of “Get down!”

“It was really, really, really shocking,” Whitler told KABC-TV as she stood with her father in the parking lot. “It looked like he knew what he was doing.”

The slain sheriff’s officer was a 29-year veteran of the force with a wife and son and planned to retire in the coming year, said the sheriff, choking back tears.

“Ron was a hardworking, dedicated sheriff’s sergeant who was totally committed,” Dean said, “and tonight, as I told his wife, he died a hero because he went in to save lives.”