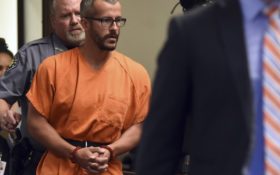 After his pregnant wife and two daughters disappeared, Christopher Watts stood on his porch in Colorado and lamented to reporters how much he missed them.

He longed for the simple things, he said, like telling his girls to eat their dinner and gazing at them as they curled up to watch cartoons.

“Last night, I had every light in the house on. I was hoping that I would just get ran over by the kids running in the door, just barrel-rushing me, but it didn’t happen,” he told Denver TV station KMGH.

On Thursday, Watts was in jail after being arrested on suspicion of killing his family, probably before he spoke those words. Authorities did not offer a motive.

The body of 34-year-old Shanann Watts was found on property owned by Anadarko Petroleum, one of the state’s largest oil and gas drillers, where Christopher Watts worked, police said. Investigators found what they believe are the bodies of 4-year-old Bella and 3-year-old Celeste nearby on Thursday afternoon.

“As horrible as this outcome is, our role now is to do everything we can to determine exactly what occurred,” John Camper, director of the Colorado Bureau of Investigation, said at a news conference in Frederick, a small town on the grassy plains north of Denver, where fast-growing subdivisions intermingle with drilling rigs and oil wells.

Watts, 33, has not been formally charged. A judge ordered him held without bail and told prosecutors to file charges by Monday afternoon. He set a Tuesday hearing to review the case.

As he was escorted into the courtroom, Watts did not speak. He looked down for much of the hearing but made eye contact as the judge reviewed his rights.

Watts’s attorney, James Merson of the Colorado State Public Defender’s Office, left without commenting to reporters. He did not immediately respond to a voicemail left at his office Thursday by The Associated Press.

In his previous interviews with Denver TV outlets, Christopher Watts said his wife of nearly six years returned home about 2 a.m. Monday after a flight for a work trip was delayed.

He said the two had an “emotional conversation” before he left for work a few hours later and that he became concerned after she did not return his calls or texts or those of her friends. He said he came home to an empty house after a friend knocked on the door at noon and got no answer.

Shanann Watts’ Facebook account paints a portrait of a happy married life, with a constant feed of photos and videos of friends, relatives and herself. Her comments were typically upbeat, whether she was running errands, playing with her kids or promoting a health program. The couple got married in North Carolina nearly six years ago and moved to Colorado around the same time.

She posted selfies of her and her husband smiling in restaurants, at the ocean on vacation and at their house. On May 5, she wrote: “I love this man! He’s my ROCK!”

On June 19, she posted a photo of some texts with her husband after sending him a picture of a sonogram. He replied that he loved the baby already. She posted: “I love Chris! He’s the best dad us girls could ask for.”

Her page has photo collages and video slide shows praising Chris Watts, describing how their love was growing stronger and how he gave her the strength to have a third child.

The couple’s 2015 bankruptcy filing captures a picture of a family caught between a promising future and financial strain. The filing estimated that they had the same range of assets as liabilities, according to court records.

But they also had tens of thousands of dollars in credit card debt, along with some student loans and medical bills — for a total of $70,000 in unsecured claims on top of a sizable mortgage.

A spokeswoman for the oil company said Christopher Watts was fired Wednesday, but she declined to provide any details, citing the active investigation.

Shanann Watts was one of the first customers to visit Ashley Bell’s tanning salon in nearby Dacona two years ago. The two women quickly became friends, and before long they were texting or calling each other almost daily. Their daughters also played together during salon visits.

On Thursday, Bell and her family added several items to a memorial of stuffed toys, candles and flowers on the lawn of the Watts family home.

Bell said she never detected that anything was wrong between Shanann and her husband. Bell also got to know Christopher Watts and described him as a loving father.

“I just don’t understand it,” she said, reaching out to accept a flower that her daughter picked from a nearby lawn.

Shanann worked from home as a saleswoman for a freeze-dried food company and took her two girls everywhere, Bell said.

“She was always about her girls,” Bell said. “She would do anything for her girls.”

One day she came into the salon and announced that she couldn’t tan for a while, then grinned and confirmed she was pregnant.

Shanann’s father, Frank Rzucek, said on Facebook that the family did not want to talk to the media.