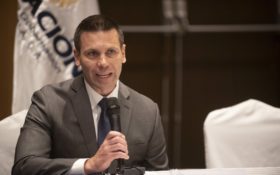 Guatemalan authorities said Wednesday they have broken up a people-smuggling ring that purportedly moved 800 migrants a year through the country and took in some $10 million doing so.

The announcement came amid a visit by the acting U.S. Homeland Security secretary, Kevin McAleenan, during which the two countries signed an agreement on jointly addressing migration and people-trafficking.

Guatemalan prosecutors and National Civil Police arrested nine people in the case, including the alleged ringleader. The suspects were said to have housed migrants from Central and South America in Guatemala and moved them across the border from the town of Gracias a Dios, Huehuetenango department, into Mexico, bound for the United States.

Officials said the operation was carried out with support from U.S. Homeland Security Investigations.