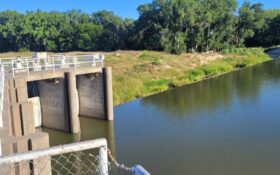 Authorities in Nebraska are trying to determine who released 16 million gallons of water by opening a dam on an irrigation channel one night this month — and why.

The puzzling water release from the Cambridge Canal reduced the flow to some 18,000 acres of crops and jeopardized expensive irrigation equipment, according to Brad Edgerton, the general manager of the Frenchman Cambridge Irrigation District that runs the nearly 48-mile-long waterway.

The canal was flowing at its normal rate of 150 cubic feet per second when Edgerton checked on his computer on the night of Aug. 13, but by the following morning the flow had been cut in half. Something had happened at the canal’s dam near the town of Cambridge, about 200 miles west of Lincoln.

Edgerton drove there and discovered that someone had wrenched open the dam’s two 10-foot sluice gates, sending the precious water down the Republican River. He estimates that about 50-acre-feet of water was lost during the roughly eight hours that the gates were open, and that the water was worth around $2,600 based on the $52-per-acre-foot price that farmers pay.

“It was an unfortunate situation. In the scheme of things, it wasn’t a lot of water, but it was an inconvenience,” he said.

Edgerton scrambled to notify farmers downstream about the problem, called the sheriff and contacted the Bureau of Reclamation to get more water released from the Harry Strunk Reservoir to replenish the canal.

Furnas County Sheriff Doug Brown told the Lincoln Journal Star that he could only guess why someone would release the water.

“There are a lot of different scenarios and theories,” he said. “But there is no evidence to lean one way or another, so all theories are still viable.”

Edgerton said he thinks the sheriff is following up on every rumor he hears but so far is stumped.

“I don’t believe they’re any closer to solving it,” he said Thursday.

It’s not clear if any state law governs the act of releasing canal water back into a river — or provides penalties — but Furnas County Attorney Patrick Calkins said he’ll try to find one if the sheriff does find out who grabbed the hand crank wheel from where it hung nearby and used it to open the gates.

“If we get information on who did this, I’d look at charging that person with something,” Calkins said.