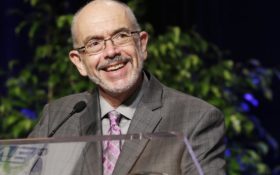 A former Connecticut prison inmate has filed a lawsuit alleging she hasn’t been paid for her contribution to a new book by author Wally Lamb and accusing Lamb of harassing and intimidating her when she sought compensation.

Chandra Bozelko, of Orange, Connecticut, says in a state lawsuit filed last week that she wrote an essay about her time working in a prison kitchen that Lamb included in a compilation of writings by female inmates. The book, which is in advance release publication and set for formal release next year, is titled “You Don’t Know Me: The Incarcerated Women of York Prison Voice Their Truths.”

Bozelko, who was released in 2014 from the York Correctional Institution in Niantic after serving more than six years for identity theft and other crimes, claims Lamb promised several inmates about $1,400 apiece for their writings but she hasn’t been paid.

The lawsuit also names publisher Counterpoint, of Berkeley, California, and Anonymous Content, a talent agency based in Los Angeles.

Lamb, who lives in Mansfield, Connecticut, burst onto the literary scene in 1996 when Oprah Winfrey selected his novel, “She’s Come Undone” for her book club and it became a best-seller. He has run a writing workshop for inmates at the York prison, where he met Bozelko, and edited two other books containing their essays. Another Lamb book, “I Know This Much is True,” is being made into an HBO miniseries in upstate New York, where a fire destroyed the set earlier this month.

Bozelko, now a freelance writer and vice president of the National Society of Newspaper Columnists, alleges in the lawsuit that she gave Lamb her essay in September 2017. In an email, Lamb praised Bozelko for her writing and said he would provide her information on payment after making a deal with a publisher, according to the lawsuit.

In May 2018, Lamb informed the writers that he sold the book to Counterpoint and they would be getting about $1,400 apiece, Bozelko said. Bozelko later made several inquiries to Lamb and Anonymous Content about getting a contract for her work on “You Don’t Know Me,” but a deal was never made, the lawsuit says.

After Bozelko inquired about the promised payment, the lawsuit says, Lamb wrote to the inmates saying extended contract negotiations between the publisher and his literary agency were holding up all the payments. He also wrote that his exchanges with some of the inmates about the payments had left him “feeling fed up, discouraged, and disrespected,” according to Bozelko.

Bozelko also alleges she received several anonymous text messages, which she believes were from Lamb or an associate of Lamb, that threatened her career, including ones that read “be forewarned that your continuing investigation will lead only to your professional demise” and “Disrespecting your elders and people who taught you is a dangerous game.”

Bozelko further alleges that her lack of a contract for Lamb’s new book is threatening her contract with her publisher.

The lawsuit says she is seeking more than $15,000 in damages.