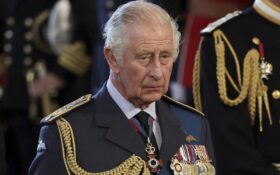 Australian Prime Minister Anthony Albanese said Thursday it would be “perfectly acceptable” for King Charles III to continue to advocate for climate change action in his new apolitical role as monarch.

Albanese was speaking ahead of his departure for Queen Elizabeth II ’s funeral.

Albanese said the new king would decide whether he continues to advocate for reduced greenhouse gas emissions, as he has done for years as a prince.

“It’s important that the monarchy distance from party political issues. But there are issues like climate change where I think if he chooses to continue to make statements in that area, I think that is perfectly acceptable,” Albanese said. “It should be something that’s above politics, the need to act on climate change.”

The British monarch is also Australia’s head of state.

In his first speech as king last week, Charles suggested he would be more circumspect as monarch and step back from his advocacy on a range of issues.

The lifelong environmentalist said he was confident that work on “the issues for which I care so deeply” would “go on in the trusted hands of others.”

Albanese’s new center-left Labor Party government has enshrined in law a target to reduce Australia’s greenhouse gas emissions by 42% below 2005 levels by the end of the decade.

Australia said it was helping officials from Solomon Islands, Papua New Guinea, Tuvalu, Samoa and a fifth unnamed British Commonwealth nation in the Oceania region to travel to London for the funeral on Monday.

But those officials are not flying on the same Royal Australian Air Force plane as Albanese, his partner Jodie Haydon, Governor-General David Hurley and his wife Linda Hurley. They are accompanied by nine so-called “everyday Australians,” including wheelchair tennis star Dylan Alcott, who have been invited by Buckingham Palace.

There were supposed to be 10 everyday citizens, but racehorse trainer Chris Waller decided against going to the funeral because a close contact had caught COVID-19.

Horse trainer Gai Waterhouse and her bookmaker husband, Robbie Waterhouse, who are also guests of the palace, are flying with the prime minister because they informed Albanese’s office on Wednesday that they couldn’t book a commercial flight because of heavy demand.

The Australian government has not released details of how it is assisting leaders of Pacific island neighbors to travel to London.

Some likely traveled on a second air force Boeing 737 jet that left Sydney on Thursday.

The Solomon Islands will be represented by its governor-general, David Vunagi, who left the country on Wednesday, that government said.

Albanese’s government wants an Australian president to replace the British monarch as Australia’s head of state.

But Albanese said holding a referendum on creating an Australian republic is “not feasible” during his government’s first three-year term in office. His said his priority is a referendum that would acknowledge in the constitution that Indigenous people were living in Australia before British settlers arrived in 1788.

“Regardless of people’s views about other issues — the constitution and our system of government — I think it’s impossible to not respect the extraordinary job and dedication to service that her majesty showed,” Albanese said.

Albanese has meetings arranged with the king, British Prime Minister Liz Truss and Canadian Prime Minister Justin Trudeau over the weekend before the funeral.

A referendum in 1999 that would have replaced the queen with an Australian head of state failed.