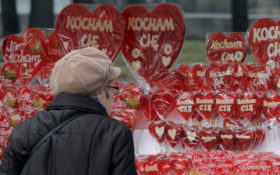 She is a survivor of the Auschwitz death camp. He is a former Scottish commando who was on the scene when the Nazis fell.

They met at a dance shortly after surviving prisoners were freed from the horrific Nazi death camp and have been celebrating Valentine’s Day together since 1946.

So John Mackay and his wife Edith weren’t going to let living in a nursing home keep them from marking the romantic occasion. They had a bit of a party Tuesday at the Balcarres Care Home in Scotland.

Activity director Pamela Shaw said Mackay, 96, has suffered a stroke but is recovering, and 92-year-old Edith is still going strong.