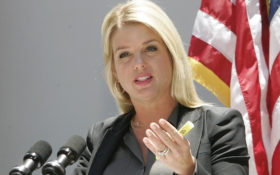 Florida Attorney General Pam Bondi attended a showing of the children’s TV host Fred Rogers’ documentary on Friday night — only to be attacked and spit on by left-wing hecklers.

As Bondi left the theater after watching “Won’t You Be My Neighbor,” a documentary about legendary Mr. Rogers, the attorney general had to be escorted to her car by police as progressive activists shouted at her.

The Left-wing mob threatened, yell, and spit at the attorney general in opposition over her support for the Trump administration’s decision to join a lawsuit against the Affordable Care Act.

“What would Mister Rogers think about you and your legacy in Florida? Taking away health insurance from people with pre-existing conditions, Pam Bondi!” Maria Jose Chapa, a liberal organizer, screamed at Bondi. “Shame on you!”

Another protester was quoted shouting, “You’re a horrible person!”

Pam Bondi attempted to attend a screening of the Mister Rogers documentary a day after announcing her plan to end protections for health care consumers with pre-existing conditions. Here, via @timintampa, is what happened. pic.twitter.com/zMLrSayS8M

According to witnesses, the recording shared on social media was only a portion of what actually took place.

“The video they are choosing to share is of the least aggressive portion of the attack that transpired after police arrived to control the scene. What they are not sharing publicly are several previous encounters involving large men getting in the Attorney General’s face, spitting and blocking her exit,” Whitney Ray, a witness, said.

According to Fox News, Bondi did not believe the actions of the protesters aligned with the movie she was there to see.

“We were in a movie about anti-bullying and practicing peace and love and tolerance and accepting of people for their differences,” she said. “We all believe in free speech, but there’s a big difference there.”