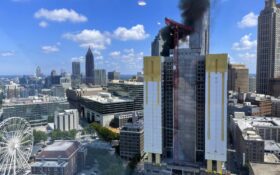 A fire broke out on the rooftop of a skyscraper under construction in downtown Atlanta on Wednesday, bringing dozens of firefighters and police officers to the site near Centennial Olympic Park.

Flames were visible on the roof of the 32-story tower, sending a dark column of smoke into the sky. Construction workers spilled out of the building before firefighters extinguished the blaze.

Called The Metropolitan at Atlanta, the tower is slated to be an 835-bed, 265-unit residence, aimed at Georgia State University students. Permits filed in 2021 when construction began valued the work at $56 million.

The building is supposed to be completed in August 2023. While its steel and concrete structure has been erected, the interiors remain unfinished.

The building’s developer and contractor did not immediately respond to the Associated Press’s requests for comment.