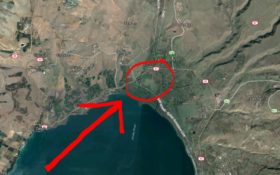 The New Testament just got a huge boost by an archeological discovery in Israel — and it offers further proof that the Bible is historically accurate, a fact that atheists have long denied.

On the northern shore of the Sea of Galilee, the city of Bethsaida — the birthplace of three of Jesus Christ’s apostles, Peter, Andrew and Philip —  appears to have been uncovered by archeologists.

The location was an important place during the life of Jesus Christ. The city was the location where Jesus restored sight to a blind man, according to the Gospel of Mark 8:22-26.

Additionally, the Gospel of Luke 9:10-17 describes a location near Bethsaida as the spot where Jesus miraculously fed 5,000 people with only five loaves of bread and two fish.

Previously, experts believed the area, el-Araj, was not populated during the Roman period. However, recent discoveries by archaeologists from Nyack College in New York and the Kinneret Institute for Galilean Archaeology at Kinneret College, Israel have found startling evidence this could be a previously-lost site that was important in the life and teachings of Jesus Christ.

The site is also believed to be where the Romans founded the city of Julias in 30 AD.

In a statement to Fox News, the excavation team said: “The results of this season’s excavation indicate that el-Araj should now be considered a leading candidate for the lost city of Jesus’ apostles.”

“There are indications that we’re excavating Bethsaida-Julia – we have to continue digging to confirm and clarify,” Notley said. “This is really one of the few [holy biblical sites] that has remained lost.”

“The Byzantine structure at el-Araj also offers a fascinating glimpse into the site’s biblical past. Small gilded glass blocks called tesserae that form part of a mosaic were found, suggesting that the building was once an important church,” Breitbart reported.

They continued: “Archaeologists note that Willibald, the bishop of Eichstatt in Germany, visited the Holy Land in 725 A.D., and described visiting a church at Bethsaida built over the remains of the house of apostles Peter and Andrew. ‘It may well be that the current excavations have unearthed evidence for that church,’ explained the archaeologists in their statement.”

Comment “Hallelujah” below if you believe prayers are answered everyday!