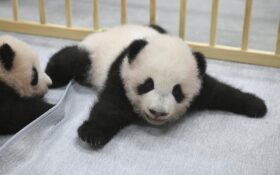 Giant panda twins born at Tokyo’s Ueno Zoo in June got their names Friday — Lei Lei for the female cub, and Xiao Xiao for her brother. They were chosen from hundreds of thousands of suggestions sent from fans around Japan.

The twin cubs, which were palm-size pink creatures when born on June 23, have grown and now have their unique black-and-white blocks, with black fur around their eyes, ears and limbs.

“Together, Xiao Xiao and Lei Lei can mean bright dawn leading to the future. I think their names have a very bright image,” she said.

In a short video that Koike played, the siblings in a baby cot cuddled, crawled slowly and went to sleep. “Adorable,” she said, and played the video twice.

Like elsewhere in the world, pandas are hugely popular in Japan. Before deciding their names, Tokyo officials even set up a name selection committee.

Officials from the zoo and the Tokyo government chose the names from more than 190,000 entries sent from around Japan and after consulting with the Giant Panda National Park in China, which owns the pandas.

Both of them weigh about 6 kilograms (13.2 pounds) — nearly 50 times their weight at birth — and about 60 centimeters (2 feet) long, according to the zoo.

Koike said the panda cubs are still raised inside the zoo but their debut is expected in January when they turn 6 months, along with their mother panda.