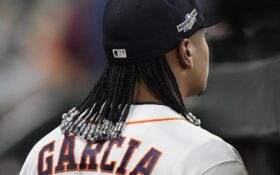 Astros starters Framber Valdez and Luis Garcia look like naturals on the mound, even in the hairiest of situations.

A lot of work to make it seem that easy — at the ballpark and, as it turns out, at the barber shop.

Both pitchers completed their coiffures with an artificial boost this season, adding hair extensions as a means of expressing their individuality. They’re showing off those locks this postseason as Houston tries to reach the World Series for the fourth time in six years.

“At first a lot of people were talking about it and joking about this topic,” Valdez said in Spanish through a translator. “But at the end of the day I feel comfortable with my hair, and I feel good about my hair, so I’ll keep having my hair like this.”

Garcia, who opened the season with natural shoulder-grazing curls, this summer opted to add length and volume via braids adorned with beads at the end.

“When I have the braids, everybody knows me more, because it’s not a normal look,” the 25-year-old said.

For Valdez, who will start Game 2 of the AL Division Series on Thursday against Seattle, the transformation was more dramatic.

To stand out at his first All-Star Game in July, the 28-year-old left-hander added dreadlocks that fall past his shoulders to hair that was previously cropped closely on the sides with a few inches of growth on the top.

Quirky facial hair has long been a staple in the sport, too — like Rollie Fingers’ handlebar mustache or Al Hrabosky’s Fu Manchu.

Astros first baseman Yuli Gurriel long had Houston’s most notable hairstyle. His spiky top looks like the leaves of a pineapple, and he is known as “La Piña,” the Spanish word for the fruit.

Gurriel wasn’t initially a fan of Valdez’s extensions. He even cracked a few jokes.

“At first, I thought he looked very strange with all of the hair that he came in with,” Gurriel said in Spanish through a translator. “But now, I like his style and think it looks really good, and I really like when people change their style because I also like to change mine.”

It’s been a better reception than NBA star Jimmy Butler got for his faux-locks this summer. The Miami Heat forward was bombarded by blowback on social media when he unveiled long dreadlock extensions. He denied they were extensions at media day, even though his Instagram posts made it clear they were. By the time he took the court for Miami’s first preseason game, the long-haired look was gone.

Valdez took some good-natured teasing from Gurriel and others at first, but neither he nor Garcia have endured mockery like Butler. Both say they don’t care if people dislike the unconventional styles.

The hair accoutrements come with a major time investment. Both Valdez and Garcia said the initial installations took more than four hours. Subsequent touch-ups run about 90 minutes to two hours.

Garcia had his extensions all summer but recently took them out to “let his hair rest.” He got a fresh set of thin braids — with three clear beads at the end of each — installed Monday after Houston’s workout.

He didn’t have beads on the first extensions he got in June, and his teammates were perplexed about where a clicking noise was coming from as they took the field this week.

“It was kind of loud when I was walking, and the guys said: ‘What is that sound?’ And I said: ‘This,’” Garcia said, pointing at the beads on his hair.

What does a 15-game winner do for four hours in the barber’s chair?

He did run into a small problem when he first added his extensions. His cap no longer fit, and he had to get one two sizes bigger. He laughed recalling that conversation with Houston’s equipment staff.

Houston has had its share of showy hairdos. Catcher Martín Maldonado dyed his pink this season at the behest of his young daughter, then debuted a crimson tone for Game 1 of the ALDS. Pitcher Jose Urquidy and utility player Aledmys Díaz are among a handful of other Astros who’ve added blonde highlights.

It’s the sort of youthful exuberance the sometimes stodgy sport has been trying to encourage.

“It’s showing a lot of personality in the game,” Díaz said. “In the past, when I got to the league in ’16, people were more like old school baseball. You just show up to the park and play the game.

“But right now, with social media and things going on, players like showing off their personalities, and I think that’s great for the game.”

Maldonado, who has helped both Valdez and Garcia find success on the mound, raved about their looks. He joked with Valdez that he was trying to be the left-handed Luis Castillo soon after he unveiled his extensions. Castillo, a fellow Dominican who will start opposite Valdez for Seattle on Thursday, has longer natural dreadlocks that he’s been growing for years.

“So now it’s funny they’re going to face each other,” Maldonado said.

Díaz is very superstitious and believes a new hairstyle can bring good luck. He got a haircut every week for a stretch in 2019 after he started hitting a homer every time he got a trim.

Not to discount Valdez’s pitching skills, but Díaz thinks his extensions might have had something to do with his success this season.

“He was doing great after that hair change,” Díaz said. “So hopefully he can take it into the playoffs.”

Valdez, who ranked second in the AL behind teammate Justin Verlander with a career-high 17 wins this season, scoffed at the notion that the hair extensions brought him luck.

But he’s eager to build on his regular-season success in his start Thursday — the playoff debut for his fancy ’do.

“I’m waiting for the postseason to get here and be able to show what I’m capable of doing and show people that we can go to the World Series together as a team,” he said. “And I’m looking forward to keep showing my talent.”