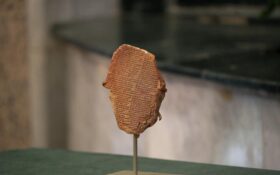 A small clay tablet dating back 3,500 years and bearing a portion of the Epic of Gilgamesh that was looted from an Iraqi museum 30 years ago and recently recovered from the United States formally returned to Iraq on Tuesday.

The $1.7 million cuneiform tablet, known as the Gilgamesh Dream Tablet, is one of the world’s oldest surviving works of literature and one of the oldest religious texts.

It was found in 1853 as part of a 12-tablet collection in the rubble of the library of Assyrian King Assur Banipal.

The tablet was looted from an Iraqi museum during the 1991 Gulf War.

Officials believe it was illegally imported into the United States in 2003, then sold to Hobby Lobby and eventually put on display in its Museum of the Bible in Washington.

Federal agents with Homeland Security Investigations seized the tablet from the museum in September 2019. A federal judge in New York approved the forfeiture of the tablet in July this year.

On Tuesday, the tablet was handed over to Iraqi authorities in a ceremony at Iraq’s Ministry of Foreign Affairs in the presence of UNESCO officials as well as Iraqi Foreign Minister Fuad Hussein and Hassan Nadhem, Iraq’s minister of culture, tourism and antiquities.

“We were able to recover about 17,926 artifacts from several countries, namely America, Britain, Italy, Japan and the Netherlands,” Hussein said.

UNESCO has described the process of recovering the valuable artifact as the culmination of decades of cooperation between the U.S. and Iraq, both of which are signatories to the UNESCO Convention of 1970.