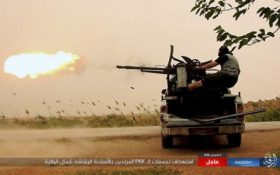 Prosecutors in Istanbul issued warrants on Tuesday for the detention of 118 military personnel over their suspected links to a U.S.-based Muslim cleric as authorities pressed ahead with a crackdown on a network Turkey blames for a failed coup attempt in 2016.

The state-run Anadolu Agency said 72 of the suspects were detained in simultaneous raids in 35 provinces across Turkey for alleged ties to cleric Fethullah Gulen’s network. Police were searching for 46 other suspects, the agency reported.

The agency said 98 of the suspects targeted by the warrants are currently serving in the military and two of them are civilians.

Since the coup, about 77,000 people have been arrested and around 130,000 others, including military personnel, have been dismissed from state jobs in the on-going crackdown on Gulen’s network.

Gulen, who has been in self-imposed exile in the United States since 1999, denies involvement in the coup attempt which killed about 250 people and injured around 2,000 others.