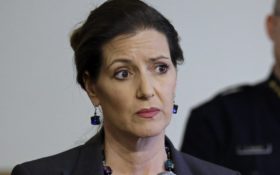 A federal immigration official says over 800 people living illegally in Northern California avoided justice because Oakland Mayor Libby Schaaf illegally warned that immigration raids were upcoming — and it could mean this close political ally of the Clintons — is heading to jail for a long, long time.

U.S. Immigration and Customs Enforcement chief Thomas Homan told “Fox and Friends” Wednesday that Schaaf’s action was “no better than a gang lookout yelling ‘police’ when a police cruiser comes in the neighborhood.”

According to Hot Air, what Schaaf did was a felony.

“When you’re an elected official and you warn people about a flu epidemic, a wildfire approaching the city or a water main break, you’re responsibly protecting your residents. When you warn a criminal that law enforcement is coming for them you’re engaged in something known as ‘harboring.’ (Specifically, to clandestinely shelter, succor, and protect improperly admitted Aliens.),” reported Jazz Shaw.

The Department of Justice outlines the law very clearly in Title 8, U.S.C. 1324(a) Offenses:

Harboring — Subsection 1324(a)(1)(A)(iii) makes it an offense for any person who — knowing or in reckless disregard of the fact that an alien has come to, entered, or remains in the United States in violation of law, conceals harbors, or shields from detection, or attempts to conceal, harbor, or shield from detection, such alien in any place, including any building or any means of transportation.

The penalty for violation of this federal law is 5 years imprisonment, or even the death penalty if one’s actions caused the death of another:

Moreover, if the violation results in the death of any person, the defendant may be punished by death or by imprisonment for any term of years.

Homan says the Justice Department is looking into whether Schaaf obstructed justice.

If she’s charged and convicted, that could mean up to five years — for each felony. If 800 illegals escaped justice because of her actions, that’s a lot of time behind bars.

Despite her warnings, ICE on Tuesday said that agents arrested more than 150 people in California after the mayor’s warning in a sweep that covered cities from Sacramento to Stockton in California’s Central Valley agricultural heartland.

Schaaf has previously declared that she was willing to go to jail to protect illegal immigrants from the law.

Under Attorney General Jeff Sessions, she might just get her chance.

Should Mayor Libby Schaaf be arrested for her crimes?