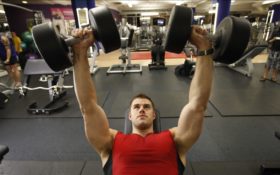 Italian bodybuilder, boxer and actor Franco Columbu, one of Arnold Schwarzenegger’s closest friends, has died in his native Sardinia. He was 78.

Columbu died at John Paul II hospital in the city of Olbia after he became ill while swimming in the sea, the hospital said. He lived in Los Angeles for years but was vacationing in Sardinia.

Schwarzenegger, a bodybuilder before he turned to acting, posted a warm farewell on Twitter about the man he called “my best friend.” He often referred to Columbu as the strongest man he ever knew.

The two men built an enduring friendship after meeting in Germany 54 years ago.

“I love you Franco. I will always remember the joy you brought to my life, the advices you gave me, and the twinkle in your eye that never disappeared,” the move star and former California governor wrote.

After starting his career as a boxer, Columbu progressed into Olympic weightlifting, powerlifting, and later bodybuilding, winning the prestigious title of Mr. Olympia in 1976 and 1981.

Besides his athletic career, Columbu acted for TV shows series and in movies. He appeared in three of Schwarzenegger’s films: “The Terminator,” ″The Running Man” and “Conan the Barbarian.”

“The greatest and strongest bodybuilder I have ever met has passed… He taught me many things that I have applied throughout my life – We will NEVER HAVE A MAN LIKE THIS AGAIN,” the actor tweeted

Schwarzenegger, who chose his longtime friend to be his best man when he married Maria Shriver in 1986, also paid tribute to Columbu Saturday on the website Medium and photos of them taken together.

“From the minute we met in Munich, you were my partner in crime. We pushed each other, we competed with each other, and we laughed at every moment along the way,” the actor wrote.