Armed standoff ends... after cop does WHAT? - The Horn News 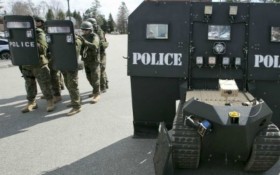 Authorities say an armed man who held off SWAT members for 10 hours surrendered after one of them sang him a Christmas carol.

The Reading Eagle reports the 34-year-old Lewis allegedly fired at police officers who had responded when a concerned relative reported him acting erratically Christmas night.

The shots hit a police vehicle, a house and another vehicle. Police returned fire.

Eventually a negotiator got Lewis to agree to surrender after singing “White Christmas” to him.

Lewis was charged with multiple counts of attempted homicide, aggravated assault and other offenses. He was being held in Chester County Prison without bail