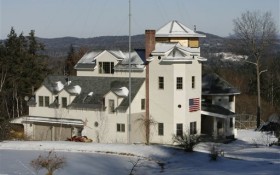 Two New Hampshire properties — including a 100-acre compound at the center of a 2007 armed standoff with federal agents that featured underground escape routes — were finally sold at auction Thursday.

The auction punctuated a two-year effort to sell the properties belonging to tax evaders Ed and Elaine Brown, which attracted no bidders at another auction last year because authorities couldn’t guarantee that they weren’t booby trapped.

The Browns became anti-government celebrities when they held federal agents at bay for nine months after they were convicted of tax evasion and refused to surrender to U.S. marshals. Security was tight Thursday, with more marshals than bidders present.

New Hampshire businessman James Hollander bought both properties during a federal auction that attracted seven bidders and lasted barely 15 minutes. Hollander paid $205,000 for the compound in Plainfield and $415,000 for Elaine Brown’s dental office in Lebanon.

Marshals said Hollander, 65, who did not want to speak with the media, was ushered out of the federal courthouse in Concord through a nonpublic exit.

Jeff and Amy Knight of White River Junction, Vermont, were there to bid on the dental office but Amy had toured the Plainfield compound and pronounced it “terrific.” She saw what she described as an “escape route” that was on the other side of a trap door on the first level and a cement bunker in the basement.

“There were passageways everywhere,” she said.

The Browns are now in their 70s and serving prison sentences of more than 30 years. The 2007 standoff started when federal agents came to take them into custody.

During the ensuing showdown, the Browns welcomed anti-tax and anti-government supporters to the compound, including Randy Weaver, whose wife and son were killed along with a deputy U.S. marshal in a 1992 shootout in Ruby Ridge, Idaho. It ended without incident after federal agents delivered a pizza and took the Browns into custody.

They were convicted in 2009 of amassing weapons, explosives and booby traps and plotting to kill federal agents who came to arrest them. Before an auction last year, federal agencies couldn’t ensure the entire parcel was free of booby traps, but the hilltop house and the grounds up to the tree line have been searched extensively and deemed free of improvised explosive devices.

The properties were seized and a federal judge ordered them auctioned to pay back property taxes owed to Plainfield and Lebanon.

Hollander is the owner and president of Hot Grips, which manufactures heated handlebar grips for motorcycles, snowmobiles and off-road vehicles.

Plainfield Town Manager Steve Halleran, whose community of 2,400 residents is owed nearly $224,000 in back taxes dating back to 2007, attended the auction and said he’s happy at the prospect that the town will be able to recoup the money owed.

He said Hollander lives in Plainfield, and he’s confident the sale will be finalized. Hollander has 45 days to pay the full amount owed on the two properties.

Attorney Shawn Tanguay, who represents Lebanon, said the city of 13,000 is looking forward to recovering at least some of the $328,000 owed in back taxes and get the property back on the tax rolls.