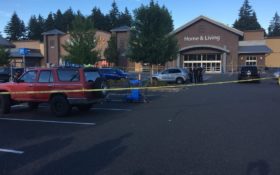 A good-guy with a gun saved America from what could have been another deadly mass shooting on Sunday — and the mainstream media has been totally silent.

A gunman injured a teen and shot a man in a pair of carjacking attempts before being killed by an armed bystander outside a Washington state Walmart store.

The incident at the Walmart in Tumwater happened about 5 p.m.

A witness told KOMO-TV that people were in line when they heard gunfire in the store. Witnesses told other media that they were inside the store and heard shots.

Tumwater Police Department spokeswoman Laura Wohl said it is unclear whether the gunman was ever inside the store or if shots were fired inside, The Olympian reported.

Wohl said a man was shot when the gunman tried to carjack his vehicle.

Two bystanders outside the store drew their weapons and at least one of them fatally shot the gunman, Wohl told The Olympian.

The carjacking victim was flown by helicopter to a hospital, she said.

Police are investigating four scenes connected with the shooting.

The chain of events began with a report of a drunken driver but none was found. Police then responded to reports of shots nearby, Wohl said, and learned that a man had tried to carjack two vehicles. A 16-year-old girl was injured in the carjacking attempt.