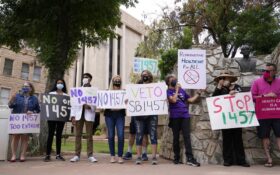 The Arizona Legislature on Thursday joined the growing list of Republican-led states to pass aggressive anti-abortion legislation as the conservative U.S. Supreme Court is considering ratcheting back abortion rights that have been in place for nearly 50 years.

The House voted on party lines to outlaw abortion after 15 weeks of pregnancy, mirroring a Mississippi law now being considered by the nation’s high court.

The bill explicitly says it does not overrule a state law in place for more than 100 years that would ban abortion outright if the Supreme Court overrules Roe v. Wade, the 1973 case that enshrined the right to abortion in law.

The bill now goes to Republican Gov. Doug Ducey, an abortion opponent who has signed every piece of anti-abortion legislation that has reached his desk since he took office in 2015.

Florida lawmakers passed a similar 15-week abortion ban early this month that Republican Gov. Ron DeSantis is expected to sign. A bill in West Virginia failed to pass the state Senate by the time its legislative session ended earlier this month after passing the House.

An Arizona proposal that would outlaw abortion after about six weeks has not advanced. A bill enacted in Texas last year allows private citizens to enforce the ban, and the Supreme Court refused to block it. Idaho’s governor signed a copycat bill this week. Those measures are unique in that they allow private citizens to file civil lawsuits against anyone who helps someone else get an abortion after six weeks. It has made legal challenges difficult because the government is not involved in enforcement.

The Arizona 15-week abortion ban bill contains no exceptions for rape or incest or for a medical emergency. It would also bar abortions for families that learn in pregnancy later on that a fetus is not viable.

The measure was pushed by the Center for Arizona Policy, a prominent social conservative group that pushes religious freedom, anti-abortion and parental rights bills.

Democrats criticized what they called GOP lawmakers’ disconnect between opposing abortion and refusing to provide more funding for the poor and uninsured.

They also said the measure is unconstitutional and that any ban would disproportionally impact poor and minority women who won’t be able to travel to states without strict abortion laws.

But Sen. Nancy Barto, the Republican sponsor of the bill, has said she hopes the high court upholds Mississippi’s law banning abortion after 15 weeks.

“The state has an obligation to protect life, and that is what this bill is about,” Barto said during Senate debate last month.

The debate and vote on the 15-week abortion ban came the same morning that the House also passed a ban on transgender girls from playing on the high school or college sports team that aligns with their gender identity. The House voted Thursday to approved a bill banning gender reassignment surgery for anyone younger than 18. Both passed with no Democratic support.

Arizona already has some of the nation’s most restrictive abortion laws, including one that would automatically outlaw it if the high court fully overturns Roe.

Republicans hope to put the 15-week ban in place so it takes effect quickly if the Supreme Court further limits abortion rights but stops short of fully overturning Roe. The measure closely mirrors the Mississippi law.

Under current abortion rulings, abortion is legal until the point a fetus can survive outside the womb, which is usually around 24 weeks.

Barto’s bill would make it a crime for a doctor to perform an abortion after 15 weeks but would prohibit the prosecution of pregnant people for receiving one. Doctors could face felony charges and lose their license to practice medicine. There is an exception for cases when the mother is at risk of death or serious permanent injury, but not for instances of rape or incest.

Of the 13,186 abortions performed in Arizona in 2020, 636 were after 15 weeks of pregnancy, according to the latest data from the Arizona Department of Health Services.