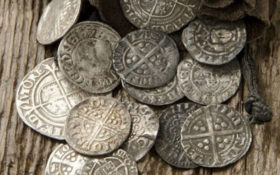 Romanian and German archeologists have discovered a prehistoric fortress dating back as far as 3,400 years in western Romania.

Archaeologist Florin Golgatan told The Associated Press that the find represented “one of the biggest prehistoric fortresses in Europe in the Bronze Age.”

Golgatan, a researcher at the Archaeology Institute in Cluj northwestern Romania, said the team used specialized archaeological magnetic equipment to take underground measurements. Last week, they completed a dig uncovering 135 acres of the 198-acre site, built between 1,400 B.C. and 1,200 B.C., located near the town of Santana, and plan to continue next year.

He said German archaeologists helped with financing and specialized equipment.

Romanian archeologists first began to excavate the site in 2009.