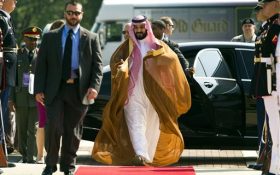 Acting as a mediator, Kuwait has presented Qatar a long-awaited list of demands from Saudi Arabia, Bahrain, the United Arab Emirates and Egypt, four Arab nations that cut ties with Qatar in early June. A copy of the list was obtained by The Associated Press and translated from Arabic.

The focus of the demands was on combating terrorism, targeting terrorist groups such as the Muslim Brotherhood and ISIS.

A look at the demands:

– Curb diplomatic ties with Iran and close its diplomatic missions there. Expel members of Iran’s Revolutionary Guard from Qatar and cut off any joint military cooperation with Iran. Only trade and commerce with Iran that complies with U.S. and international sanctions will be permitted.

– Shut down Al-Jazeera and its affiliate stations.

– Immediately terminate the Turkish military presence currently in Qatar and end any joint military cooperation with Turkey inside of Qatar.

– Stop all means of funding for individuals, groups or organizations that have been designated as terrorists by Saudi Arabia, the UAE, Egypt, Bahrain, the United States and other countries.

– Hand over “terrorist figures” and wanted individuals from Saudi Arabia, the UAE, Egypt and Bahrain to their countries of origin. Freeze their assets, and provide any desired information about their residency, movements and finances.

– Stop all contacts with the political opposition in Saudi Arabia, the UAE, Egypt and Bahrain. Hand over all files detailing Qatar’s prior contacts with and support for those opposition groups.

– Pay reparations and compensation for loss of life and other, financial losses caused by Qatar’s policies in recent years. The sum will be determined in coordination with Qatar.

– Align itself with the other Gulf and Arab countries militarily, politically, socially and economically, as well as on economic matters, in line with an agreement reached with Saudi Arabia in 2014.

– Agree to all the demands within 10 days of it being submitted to Qatar, or the list becomes invalid. The document doesn’t specify what the countries will do if Qatar refuses to comply.

– Consent to monthly audits for the first year after agreeing to the demands, then once per quarter during the second year. For the following 10 years, Qatar would be monitored annually for compliance.