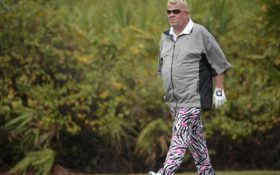 The Trump Derangement Syndrome may have gotten so bad that it’s spread overseas — and has taken over professional golf.

Earlier this week, legendary golfer John Daly was gearing up to play alongside the sport’s best at the historic British Open when he encountered a problem.

He applied to use a driving cart to get from hole to hole as he played. Daly, who once won the British Open in 1995, has trouble walking because of an excruciating case of degenerative arthritis.

His request was shut down by British Open officials. In fact, they removed the now-disabled American icon from the competition entirely.

Why the harsh response?

The Washington Free Beacon may have found the truth.

The underlying motive for the ban could be President Donald Trump. According to The Free Beacon, British Open officials may have gone after Daly as a veiled shot at Trump.

It’s no secret that Trump and Daly have a friendly relationship with one another.

Trump even went out of his way to congratulate Daly on his PGA Tour Champions title once upon a time.

“Congratulations to @PGA_JohnDaly on his big win yesterday. John is a great guy who never gave up – and now a winner again!” Trump wrote on Twitter in 2017.

Congratulations to @PGA_JohnDaly on his big win yesterday. John is a great guy who never gave up – and now a winner again!

As for Daly, his support for Trump dates back to before the election.

That's y I luv my friend @realDonaldTrump he's not politics he's business! It's what our country needs #SuperTuesday pic.twitter.com/5A5cTg3UEh

After the heated spat between Trump and U.K. ambassador to the U.S., Kim Darroch, Daly’s ban is being interpreted as retaliation.

Whatever the case, Daly took the decision like a true champion: