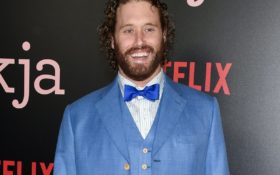 Outspoken anti-Trump Hollywood actor T.J. Miller called 911 to falsely claim that a woman he got into an argument with over loud cellphone conversations on a train had a bomb in her luggage, federal prosecutors said Tuesday.

The former “Silicon Valley” actor was arrested Monday at LaGuardia Airport in New York and released on $100,000 bond after an initial appearance in federal court in New Haven, Connecticut, on Tuesday.

Miller gained infamy this year when he quit the successful TV show because his fellow actors would not speak out on President Donald Trump’s administration.

Miller told The Huffington Post he spoke with his cast mates regularly about Hillary’s campaign, but they refused to do what he wanted.

“I asked, ‘How much money did you donate, you Hollywood elites, how much did you donate to Hillary Clinton’s campaign?’ And everybody in the cast said nothing. They hadn’t given a dollar,” he said. “What did they think was going to happen?”

The anti-Trump celeb claims that quitting his highly-rated HBO freed up time to “resist” Trump in more ways.

“My position [to oppose the Trump administration] became more powerful when I left ‘Silicon Valley,’” he said. “I had more control over the content, the time, the schedule, the everything.”

And on March 18, having no job freed up Miller’s time to call in the false bomb information after getting into what an Amtrak worker called a “screaming match” with a woman on a train traveling from Washington to New York, according to prosecutors.

Prosecutors said he at first gave the wrong train number and investigators found no explosives after stopping and evacuating passengers from a train in Westport, Connecticut.

Investigators called Miller back and he said the woman kept checking her bag without taking anything out and seemed to want to get off the train and leave her bag behind.

“I am worried for everyone on that train,” investigators said Miller told police. “Someone has to check that lady out.”

They stopped and removed passengers from the correct train and also didn’t find explosives.

Miller wasn’t on the train because he was removed in New York by Amtrak staff who suspected he was drunk after having multiple alcoholic beverages, prosecutors said.

A train attendant said that Miller “had been involved in hostile exchanges” with a woman in a different row of the first class car over loud cellphone conversations.

Miller faces up to five years in prison if convicted.

Monday’s arrest wasn’t Miller’s first brush with the law. He was arrested in Los Angeles in December 2016 after a confrontation with a driver.

Miller’s out-of-control ways could land him in prison for several years to come — and he won’t have any free time to resist the president from behind bars.