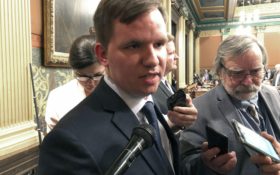 Rep. Justin Amash of Michigan, the first Republican in Congress to accuse President Donald Trump of impeachable conduct, is in trouble.

Amash is facing a primary challenge from a Republican loyal to the president.

Second-term state Rep. Jim Lower announced Monday he’s running for the western Michigan seat. The announcement came two days after Amash sent a series of tweets , concluding that special counsel Robert Mueller’s investigation into Russian meddling in the 2016 election reveals Trump “engaged in specific actions and a pattern of behavior that meet the threshold for impeachment.”

The 30-year-old Lower, of Greenville, says he made the announcement earlier than planned after Amash attacked Trump.

Amash was first elected in 2010 and overcame a 2014 primary challenge.