Anti-Trump celeb just said WHAT about conservatives!? - The Horn News 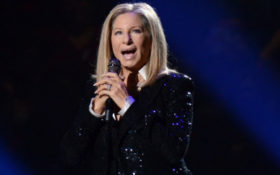 Singer Barbra Streisand’s opposition to President Donald Trump has been put on display in her newly released album — and she’s very angry at conservative women.

The 76-year-old multi-millionaire singer released a new album titled, “Walls,” earlier this month and it focuses on what she has called a “very painful time” for her in this political climate.

Streisand told The Daily Mail in a lengthy interview, that democracy is “being assaulted” and that women “don’t believe in their own thoughts,” which she claims led to Trump winning the presidency.

Noting that there is a lot of anger in her album, Streisand said, “I believe in truth and that if I’m truthful in what I’m singing about that comes across as being passionately upset with what is happening to my country.”

Streisand stated that for 40-something years, women have had the right to vote — and that perhaps they now “won’t.”

She went on to question what type of woman would want to vote for Trump. “Why would they vote for a man who doesn’t let them control their own bodies? It’s a terribly complex thing,” she said.

According to Streisand, women did not want to vote for former Secretary of State Hillary Clinton because they were too intimated.

“‘A lot of women vote the way their husbands vote; they don’t believe enough in their own thoughts. Maybe that woman who’s so articulate, so experienced and so fit for the presidency [Hillary] was too intimidating,” she said.

“All of this was so devastating to me and I was heartbroken, so I wanted to write about it, sing about it and deliver an album. It was perfect timing, so I just did it,” Streisand continued.

The singer even suggested that having Trump as president has made her so sad… that she has turned to food to make herself happy.

“I love food too much. I eat when I’m sad, I eat when I’m happy. This president made me anxious and hungry for pancakes. Buckwheat pancakes. I had to put butter on them and maple syrup to ease the pain,” she told The Daily Mail.

This was not the first time the singer voiced her opinion on the president, or the political climate.

Back in 2016 she threatened the people of Australia on “60 Minutes” by saying if Trump won, “I’m either coming to your country if you’ll let me in, or Canada.”

Two years later, and we’re still waiting for her to make good on that promise!