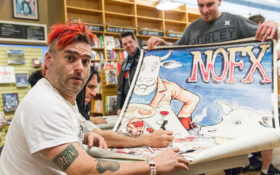 Punk rock band NOFX is in hot water after making disgusting comments about victims of the Las Vegas shooting at a music festival — and it has cost them big time.

Frontman “Fat Mike” Burkett, who has his own line of anti-Trump t-shirts for sale, made a joke at the expense of the 58 music fans who lost their lives in the tragic mass shooting last October.

One fan caught the nasty remarks on camera:

NOFX thought it would be "hilarious" to joke about the October 1 shootings while on stage in Las Vegas. They said "at least they were country fans and not punk rock fans". This is disgusting and callous. We will never support anything involving this band ever again. pic.twitter.com/am3R8QJIE6

NOFX guitarist Eric Melvin can be heard saying “I guess you only get shot in Vegas if you’re in a country band,” referring to the country acts at the Route 91 Harvest Festival, where the mass shooting took place.

“At least they were country fans and not punk rock fans,” Fat Mike responded to the crowd at the Las Vegas Punk Rock Bowling & Music Festival.

Audience members, many of whom knew victims of the shooting, were shocked and appalled at the band’s comments.

The band eventually apologized for the “insensitive” joke – but only after its biggest sponsor pulled their support of the band.

Stone Brewing Company, a San Diego-based craft beer maker, dropped the band and cut financial support from the band’s own music festival, which takes place this weekend. The brewery announced that it will be donating all profits made from working with NOFX to a foundation that supports victims and first responders.

NOFX was set to headline the Camp Punk in Drublic festival in Ohio but has been since replaced by another band.

Now they’re out of a job.