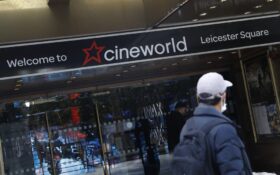 Conditions are dimming at many movie theaters around the world.

Cineworld Group PLC, one of the industry’s biggest theater operators, confirmed Monday that it’s considering filing for Chapter 11 bankruptcy protection in the U.S., as it contends with billions of dollars in debt and more empty seats in front of its screens than expected.

The British company, which owns Regal Cinemas in the United States and operates in 10 countries, said its theaters remain “open for business as usual” as it considers options for relief from its debt load. Cineworld said it expects to continue operating even after any potential filing, though its stock investors could face steep or total losses on their holdings.

Cineworld faces challenges specific to itself after building up $4.8 billion in net debt, not including lease liabilities. But the entire industry is navigating a tenuous recovery after the pandemic shut theaters worldwide.

To be sure, moviegoers have streamed back into theaters this year to see blockbusters like “Spider-Man: No Way Home,” “Top Gun: Maverick,” and ”Jurassic World: Dominion.” Industry giant Warner Discovery has said it’s doubling down on theaters and moving away from debuting films on its HBO Max streaming service.

But this summer’s $3.3 billion in ticket sales is still running nearly 20% behind the summer of 2019, before the pandemic, as of Sunday, according to data firm Comscore. And there don’t seem to be any big hits on the immediate horizon to make those numbers much better.

Cineworld said its admissions levels have recently been below expectations. And with a “limited film slate,” it expects the lower levels to continue until November. That would mean an additional crunch to its finances.

Cineworld said it’s holding talks with lenders and other major stakeholders as it reviews its financial options. It also said it expects “ultimately to continue its business over the longer term with no significant impact upon its employees.” It has about 28,000 workers, according to the company’s website.

Even if employees could make it through intact, shareholders may not. The company warned again Monday that a transaction to ease the debt on its balance sheet could hurt its stock investors.

The company’s stock in London tumbled 21.4% to the equivalent of roughly 3.8 U.S. cents. That followed a 58.3% plunge on Friday after The Wall Street Journal reported the company was preparing to file for bankruptcy protection within weeks.

Shares of other theater chains also stumbled Monday, but nowhere near as much as Cineworld. Cinemark Holdings fell 5.8% to $15.33, for example.

Its executives said earlier in August that the next two months will be challenged by a dip in new releases. But they also said they’re hopeful for a strong close of the year.

Rival AMC Entertainment has also called the upcoming film schedule relatively weak, though it’s optimistic about the end of the year and about 2023.

This year, about a third less wide-release films have been put into theaters as before the pandemic. Some of that has to do with residual delays in Hollywood’s production pipeline caused by earlier COVID-19 shutdowns and postponements. But it’s also because a lot of movies go straight to streaming.

One of the summer’s most-watched movies, the Ryan Gosling-Chris Evans action thriller “The Gray Man,” played on Netflix.

Unless films like Sony Pictures’ “Woman King,” with Viola Davis, or the buzzy Warner Bros. release “Don’t Worry Darling,” with Harry Styles and Florence Pugh, overperform expectations, the next month or two in theaters lack sure-things before “Halloween Ends” and “Black Adam” arrive in late October. Farther on the horizon, though, are a few sequels that could set box-office records: “Black Panther: Wakanda Forever” (Nov. 11) and “Avatar: The Way of Water” (Dec. 16).

AMC’s stock fell to $10.46 from $18.02 on Friday, though it had other factors impacting the shares. Monday marked the first day of trading for the company’s new preferred equity units, which have the ticker symbol “APE.”

Investors received one share of APE for every AMC share they owned at the end of Friday. Analysts said it was similar to a two-for-one stock split, a deal that often sees a company’s share price drop by roughly half. Analysts said the new APE shares offer AMC a way to raise cash in the future, which it could use to reduce its debt.

The company last year tapped the stock market to raise cash, taking advantage of a huge run-up in its share price when it got caught up the frenzy surrounding so-called meme stocks.

Its shares rose sixfold in January 2021 and then more than doubled that May and again in June. The gains were driven by hordes of amateur investors, with some referring to themselves as “apes” willing to hold the stock regardless of whether professional Wall Street called it a bad buy.