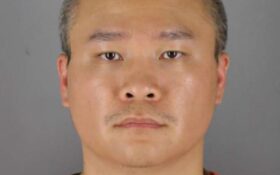 Tou Thao said during the federal trial for himself and two other former officers that it was not unusual for cadets to use their knees in handcuffing training and that he was never corrected for it.

Thao, J. Alexander Kueng and Thomas Lane are broadly charged with violating Floyd’s constitutional rights while acting under government authority as Officer Derek Chauvin pressed his knee onto Floyd’s neck for 9 1/2 minutes while the 46-year-old man was handcuffed, facedown and pleading for air. Kueng knelt on Floyd’s back, Lane held down his legs and Thao kept bystanders back.

The defense began presenting witnesses Tuesday, and all three former officers said they will testify.

Defense attorneys are seeking to show that the Minneapolis Police Department provided inadequate training and taught cadets to obey superiors. Chauvin, who was convicted of state murder and manslaughter charges last year, was the most senior officer at the scene.

Thao, Kueng and Lane are accused of depriving Floyd of medical care. Kueng and Thao are also accused of failing to intervene to stop the May 25, 2020, killing, which triggered protests worldwide and a reexamination of racism and policing. The charges allege the officers’ actions resulted in Floyd’s death.

Thao’s attorney, Robert Paule, displayed several photos from Thao’s police academy training, including some that showed Thao and others in handcuffing drills. In some photos, Thao or others used their knees to restrain people.

After displaying one of the photos, Paule asked Thao if one officer has his knee on the subject.

“On the neck,” Thao replied, saying it was an instructor.

Thao also testified that recruits were taught to address superiors by saying, “Yes sir, no sir,” or “Yes ma’am, no ma’am.”

The prosecution rested its case Monday after calling to the stand doctors, police officers and bystanders, including the teenager who recorded widely seen video of the killing.

Darnella Frazier, who was 16 when Floyd was killed, was the last witness to testify for the prosecution. Frazier, who was given a special citation by the Pulitzer Prizes for her video of the killing, said she knew Floyd needed medical care when he became unresponsive.

“It looked like he was very uncomfortable and he kept saying, `I can’t breathe,’” she said, adding that Thao looked like he was protecting and patrolling the area. When prosecutor LeeAnn Bell asked what it appeared to her that Thao might need to protect. She said Floyd “was the only one who needed protection at that moment.”

Lane, Kueng and Thao also face a separate state trial in June on charges alleging that they aided and abetted murder and manslaughter.